Hyperloop within 2021 in UAE 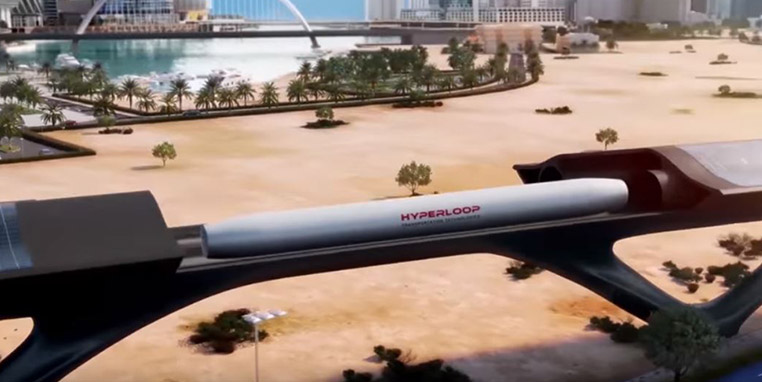 A hyperloop is a futuristic transportation technology, conceptualized as a ground conveyance in floating pods inside low-pressure tubes, enabling a travel speed of up to 1000 kilometers an hour.

Dubai aspires to be the first city with Hyperloop

In the race to bring futuristic transportation facilities, United Arab Emirates has invested in constructing cutting-edge Hyperloop One transportation system that is faster than air travel along with partnership from Virgin Hyperloop One and Dubai Roads and Transport Authority (RTA) from Dubai to Abu Dhabi. As a key player in innovation and research Dubai is emerging as the upcoming futuristic city in the world that is started building a commercial Hyperloop industry.

What is a Hyperloop One?

While the concept of magnetically-levitating Hyperloop has existed for several decades, it has been loosely used in transferring paper documents within organization and small-sized packages within small area. The hyperloop concept as it is widely known was first publically proposed by Elon Musk, CEO of aerospace firm SpaceX and Tesla Electric Ltd.

Basically, the Hyperloop concept uses tunnel infrastructure (overhead or underground) maintained at low pressure to transport electromagnetically accelerated pneumatic passenger pods at high speeds combined with partial magnetic levitation & air cushioning for floating inside the tunnel while the drag within the tunnel decreases with decrease in air drag resistance.

The tube track within the tunnel is itself is designed to be immune to external weather and earthquakes, the tube is itself a smooth surface as the passenger pod can rapidly glide at airline speeds within the tunnel for long distances with the low air pressure and non-contact suspension provided by magnetic levitation & forming pressurized air cushion around it.

Building the “Hyperloop One” infrastructure is a part of the UAE’s connectivity strategy and initiative of RTA for the Dubai Future Accelerators. While the Dubai Roads and Transport Authority (RTA) and Virgin Hyperloop One have succeeded in identifying the challenges of creating such high-speed state-of-the-art transport system with infrastructure and they have made considerable progress in engineering, technical and economic feasibility of this project.

The hyperloop boasts of deluxe interiors, cutting-edge broadcasting & display of information and entertainment materials as well as leather seats. The hyperloop technology uses an electromagnetic propulsion system to accelerate the movement of goods and services through a vacuum tube. Furthermore, the hyperloop stations are designed to encompass assortment of facilities including meeting lounges, shopping area, and kiosks. Accordingly, the hyperloop can travel between Dubai and Abu Dhabi in 12 minutes, and lift about 10,000 passengers per hour in both directions.

Furthermore, the Virgin Hyperloop One partner in Dubai hyperloop project aims to have three systems in service by 2021 with the United Arab Emirate being one among the high potential locations in the world for hyperloop system.

Significance of Dubai Hyperloop One

Eliminating the aerodynamic/magnetic drag as well as enabling last and first-mile solutions makes this the fastest way to travel. Moreover, this mode of transport revolutionizes the way people travel and accelerates economic growth in the region where this innovative & advanced mass transportation system is implemented.

Future of Hyperloop in UAE and beyond

Hyperloop has moved far from being a design in the paper to concept and now a reality.  Currently, the United Arab Emirates is spearheading in developing advanced commercial hyperloop projects and firmly driving the innovation, research and development in this hi-tech transportation sector.

The proposed Hyperloop between Dubai and Abu Dhabi will ferry passengers at speeds of 1200 km/hour with more than 6000 people able to travel each hour. Furthermore, on the basis of the primary hyperloop project there are plans to extend this commercial hyperloop service to other parts of Middle East with the goal of eventually connecting Abu Dhabi to Al Ain, Dubai and Riyadh, Saudi Arabia. Consequently, the Kingdom of Saudi Arabia has also expressed a keen interest to develop hyperloop as a part of its Saudi Agenda 2030 plan which aims to drastically reduce the kingdom’s carbon footprint.

The future of Hyperloop travel in the Middle East shall revolutionize the way people travel in the region and UAE will be a vanguard in deploying commercial hyperloop systems connecting major cities across international borders thereby paving way for other countries to learn the technology. Development of such a transport system drastically enhances the economic prospects in UAE region and creates new business opportunities for businesses. If you are looking for opportunities to start business in UAE feel free to contact us as our team is expert in setting up business operations in the region.

What are the benefits of a Hyperloop?

There are numerous benefits of the hyperloop technology, like -

What are the challenges in the construction of a Hyperloop in UAE?

Challenges are plenty regardless of the territory -