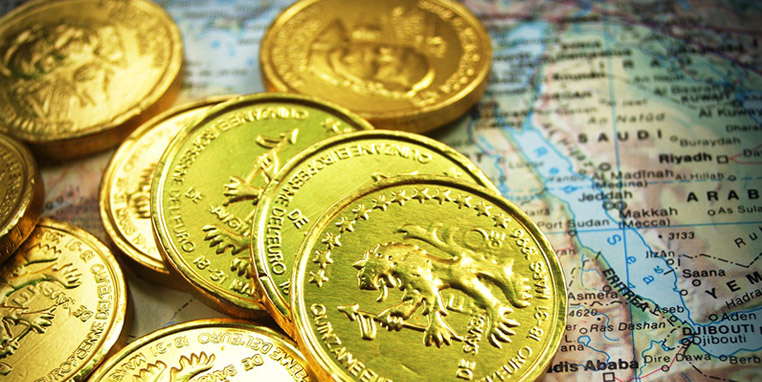 Dubai's economy is one of the fastest-growing economies, with more than three million population. In the past few years, the GDP of Dubai is projected at around 107.1 billion, with a growth rate of 6.1. It is estimated that Dubai is dominated by Real estate and construction, oil industry, trade, but on the other hand, Dubai is also called the city of gold.

(BRL) The Business Registration and Licensing sector in the Department of Economic Development , Dubai says the four thousand and eighty-six companies operate in the gold industry.

The report also includes statistics on the number of companies which are operating in Dubai. The actions of the gold market sector and the distribution of the companies around Emirate.

The report focuses on familiarising entrepreneurs with the gold sector, and the other highlight with its role, including value to the economy.

The report emphasized the distribution of the companies according to the top sub-regions. The top regions accounted for 46.5 percent of the whole number of companies, are Al Dhagaya followed by Al Ras, Warqa Al Batten, Al Rigga, Burj Khalifa, Al Muraqqabat, Port Sai, Trade Centre one and Al Barsha one.

The report also highlighted that Indians led the top ten nationalities investing in the sector, followed by the natives of Britain, Pakistan, Switzerland, Oman, Jordan, Belgium, Canada, Switzerland. The investors in the gold sector include sixty thousand and twelve businessmen and two thousand one hundred and thirteen businesswomen.

According to the Dubai Gold and Jewellery Group, The total gold, diamond and jewellery group reached AED two hundred seventy-four billion last year with an escalation of about three per cent compared to the past years.

The UAE's commerce in gold and precious stones has also grown significantly in recent times. The country's foreign trade in this particular sector is estimated at around AED four hundred billion annually. The gold import was valued at AED 142.4 billion, with the value of re-exports to AED twenty-six billion.

The gold and jewellery sector provide the residents of Dubai with gold imports from thirty countries. This also fulfils the demand of the visitor.

If you want to establish your business in Dubai, these are the following areas where you can set up your gold business.

Dubai Multi Commodities Centre has more than thirteen thousand companies and is one of the most prominent free zones in Dubai with a significant feature of hundred per cent business ownership.

These are the Company Registration Processes if you want to set up business in DMCC Free zone.

This area is a place of manufacturing block and Retail Centre. It recently began leasing office spaces for the entrepreneurs who are looking for to trade in gold.

The Mainland of Dubai

If your decision is set up business in Dubai Mainland, the excellent location is to opt for the Gold Souk market. You can even directly sell to the public here.

This traditional gold market is in the centre of the commercial district in Deira and is quite convenient for around three hundred retailers.

Commitbiz is one of the premium consultants in Dubai and can help you set up your business. We aim to transform business dreams into reality. Our experts are well experienced and are well aware of the rules and regulations. We not only help you with the legal documentation but also take care of the whole incorporation procedure. Feel free to contact us. We will be happy to assist.